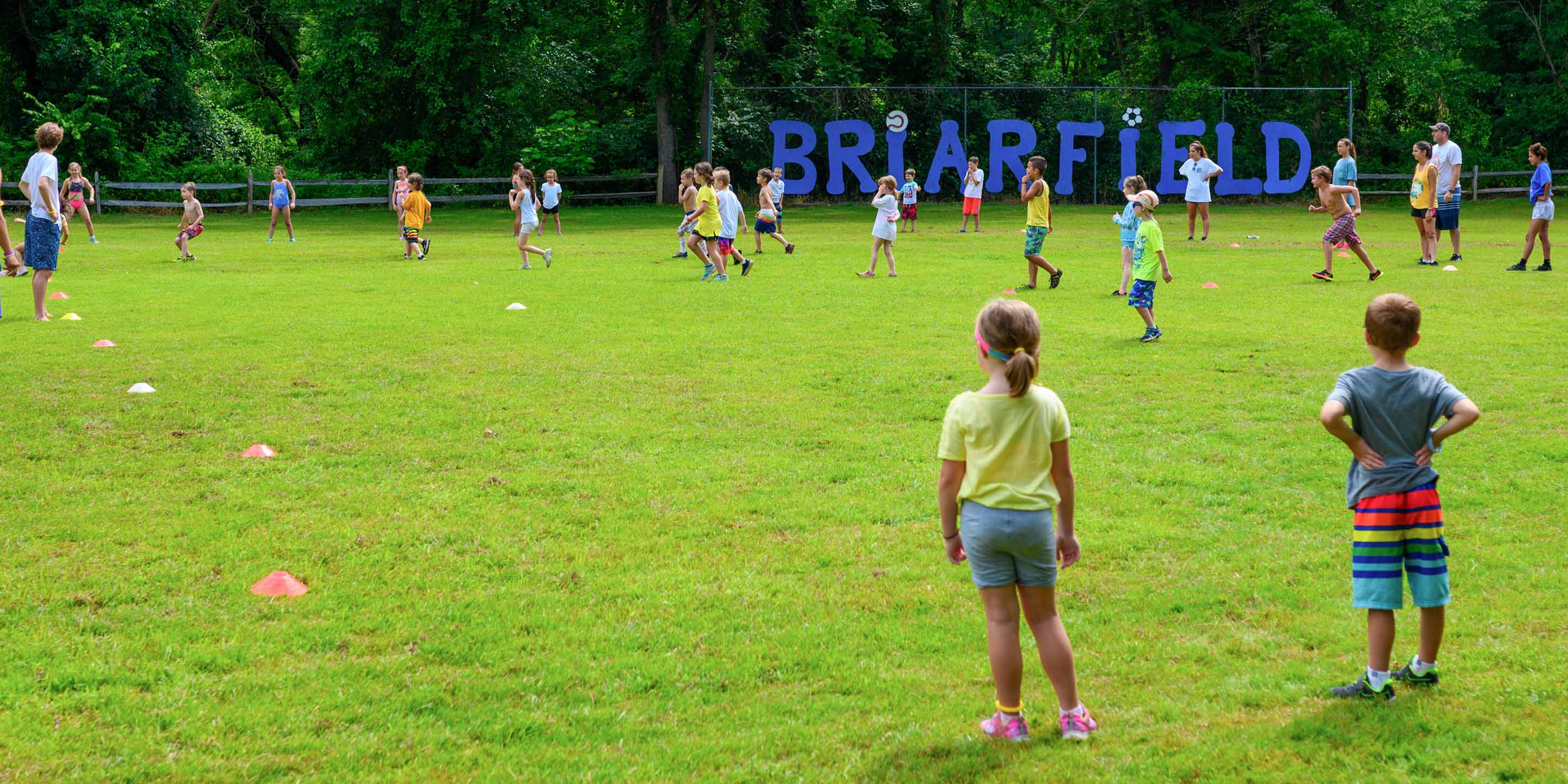 Check out our latest Briarwood Bugle! You can read it below or see it in glorious color and with photos here.

From Mike and Matt
Hot fun in the summertime . . .
We had another great week! Camp heated up and the kids had a great time swimming, playing, painting, tie dying, Zoom Flooming and everything else!
And also—Olympics were a hit, the CITs went to Dorney Park, we had an awesome mini campout for upper camp, the Busy Bees made great concoctions at cooking and, all around camp, you could see and hear bunks practicing their bunk shows.
We have a ton going on in the next few weeks—Lower Camp bunk shows, Upper Camp bunk shows, Halloween in July, Waterpalooza, Bring-A-Friend Days—plus all of our awesome, regularly scheduled program—art, sports, swimming, gymnastics, nature, rock wall and much, much more! Join us!

Bunk News
Senior Camp’s First 15 By Dan Feldgus
Needless to say senior camp has been busy. In the first 15 days of camp we have had 6 trips! Yes, SIX! We’ve jumped sky high at Rebounderz, hunted for bargains at Rice’s, played games at Dave and Buster’s, got dizzy at the Castle, ate our full of chocolate at Hershey, and had a blast on the rides at Dorney. We also rolled with the punches. When one of our trips was postponed, we had a pizza party instead. But think about that. Out of the first 15 days we were supposed to have 7 trips between all three of our bunks. That’s one every other day! And we aren’t done yet. New York, tubing, Williamsburg / Busch Gardens, the beach, bowling and laser tag…Who else in camp gets to have all this? That’s easy. NO ONE! – Dan, Bri, Paul, Sherri, Danny and Sorelle.

BRIARWOOD GOES FOR THE GOLD
By Harris Sax and Dan Green, Athletic Directors
This past week, Briarwood’s lower, upper and senior camps were divided into six countries competing in various events at the annual Briarwood Olympics. The countries our campers represented included Canada, Mexico, England, Italy, Spain and China. To show team spirit, campers proudly wore colors representing their countries. Opening ceremonies kicked off the Briarwood Olympics last Friday with a pep rally at the drama stage. Competition began Monday morning and continued over parts of the next two days, with events such as speedball, big ball four square, ultimate football and target ball. Our teams also competed in swim events, showing off the strokes they’ve mastered as well as some new strokes campers learned so far this year. All of our campers were great competitors and showed excellent sportsmanship. This annual Briarwood event is fun and brings campers together to demonstrate teamwork, camp spirit and camaraderie.

BRIARWOOD COUNSELORS OF THE WEEK:

What’s Up with the Otterly Outrageous Otters? By Howard Gottlieb
It has been an otterly amazing first three weeks with our den of Otters. I, along with our JC, Jordan, and our CITs, Danny and Ryan, have loved getting to know this year’s den of Otters. Evan and Mikah have been playing gaga every chance they can get. Dylan is always scoring hat tricks at hockey. Daniel loves flying down the zip line at the rock wall. Jack and Grant enjoy swimming like the true otters that they are at the pool. Ben spends his time bouncing his day away at the jumper, while Chase is sinking shot after shot at basketball. Meanwhile, nothing gets past Zimry at newcomb. As busy as the Otters are, we have still found time to practice for our upcoming bunk show, which promises to be our best show ever! We hope to see you there! Howard Gottlieb (SC), Jordan Jaspan (JC), Danny Wax (CIT), Ryan Zimmerer (CIT)
MEET OUR WONDERFULLY AMAZING STAFF! PART III
We return with profiles of more senior staff members at Briarwood Day Camp

TAYLOR VIOLA joins the Briarwood family as a senior counselor to the Panthers bunk. Taylor’s favorite thing about Briarwood is her awesome bunk, the Panthers are an amazing group of girls in upper camp. During the off season, Taylor is a architectural engineering major at Penn State.
MEREDITH LEACH has been a Briarwood lifeguard for 3 summers. Meredith is mom to two awesome Briarwood campers. During the off season Meredith is a school social worker. Most people would not be surprised to know that Meredith LOVES superheroes. However, surprisingly, Meredith does not watch TV.
JASON BEIFELD is celebrating his 8th summer at Briarwood. Jason can be found taking aim down at archery. Jason has one son who is a camper at Briarwood. Jason is a graduate of Penn State University and holds a Master’s degree from St. Joseph’s University. Jason’s favorite part of camp is that Briarwood community feeling.